The majority of the projects I design provide some sort of informational feedback to the user.  The primary device I use to provide feedback is a Liquid Crystal Display (LCD) based on the Hitachi HD44780 LCD command set.  These LCDs use a standard 16 contact interface and are known as parallel devices.

The LCD can be operated in two modes: 8-bit and 4-bit, respectively.  A minimum of 11 microcontoller pins are needed for 8-bit mode and 7 are needed for 4-bit mode.  Dedicating 11 or 7 pins for the LCD might pose some unwanted limits on one’s design thus, we will create a serial LCD controller that only needs one output pin.

The Hobbybotics Serial LCD controller was designed as an alternative to some of the better-known controllers at a fraction of the cost.  The design and feature set is as robust as other well-known controllers such as those available from Parallax Inc and Scott Edwards Electronics.

The Serial LCD is setup for a default baud rate of 9600 baud.  The baud rate can be set to values of 9600, 19200, 38400, 57600 and 115200.  This is accomplished by sending the sync byte 254 followed by the commands listed in the table below.  The last selected baud rate is saved in EEPROM and recalled on the next power recycle.  Ensure the connection to the serial port is refreshed at the new rate to ensure the devices stay in sync.

On power up the LCD goes through an initialization routine to allow the applied voltage to stabilize.  To allow for proper initialization ensure at least a 100ms delay before data/commands are sent.

The following are the instructions for the Hobbybotics LCD controller:

The cursor can be directly placed at any position on the display with the position cursor command.  Refer to the below table for an example LCD mapping.

The LCD backlight can be turned on/off using a simple command.  Refer to the below examples for usage.

The LCD backlight is used to illuminate the display.  The brightness can be varied from 0 to 100% by passing a value 0 – 255.  The current brightness setting can be stored in the controller EEPROM by sending command <12> and recalled by command <13>.  The last stored value is also recalled on the next power cycle.  Refer to the below examples for usage.

The controller is equipped with a 10k potentiometer to control the contrast of the LCD.  This may need to be adjusted for optimum viewing.

The character generator ram (CGRAM) built into the HD44780 compatible LCD controller allows eight custom characters to be stored into its static ram.  These characters are available so long as power is applied to the display.  Each byte of CGRAM is mapped to a 5 x 8 row/column of pixels.  Custom defined characters correspond to ASCII codes 0 through 7.  Writing to CGRAM is accomplished by sending the address location followed by eight byte values that correspond to the created character.  Refer to the below figure for an example custom character.

The custom character would be stored in the LCD memory using the below formatting.

Displaying a custom character stored in CGRAM can be accomplished simply by recalling the associated memory location.

Reference figure 1 for a typical LCD character set.  Add the row and column values for a given character.

Figure 1 – To find the ASCII code for a given character, add the row and column numbers.  CGRAM custom characters occupy locations 0 -7. 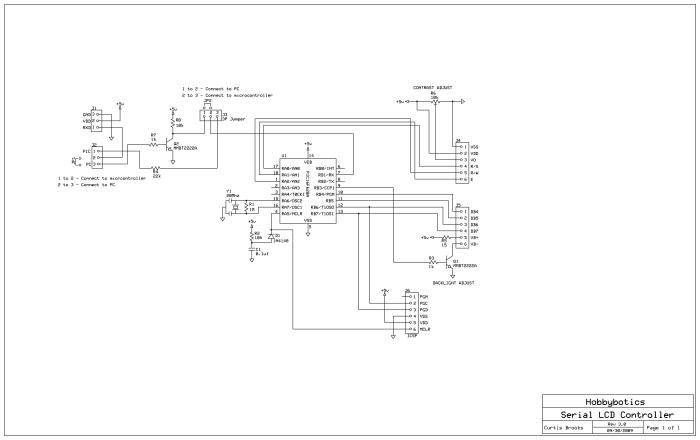 Below is a description of the main components and features:

Here are some a pictures of a previous revision board:

The schematic and PCB was developed with the freely available ExpressPCB software.

The project files and future updates can be found on my github page.

Reference the B.O.M above for a list of the parts necessary to complete the Hobbybotics Serial LCD Controller V3.0 board.

Reference the below layout file for component locations.

The firmware for this project was developed using PicBasic Pro V2.60 from microEngineering Labs.  You will need to place both *.pbp files into the same directory in order for the code to properly compile.

I won’t rehash all of the code here as you can view the complete source for that but, I do want to point out some of the key routines.

The following DEFINE statements need to be adjusted for the type of LCD you are developing for.  Specifically, the number of lines the particular LCD has (2-line or 4-line).  The other statements determine what ports will be used to interface to the LCD.  The default firmware is set up for a 4×20 character LCD:

The firmware implements a serial interrupt routine to ensure that all of the data is captured.  First, we define the interrupt handler, “ON INTERRUPT goto Serial_Interrupt” and enable interrupts on USART, “PIE1.5 = 1.”  Second, we setup the baud rate flags BRGH and RCIF.  Third, we designate EEPROM locations 0 and 1 for storing the baud rate.  The baud rate settings are read during controller initialization and saved whenever changed.  The baud rate can be changed through commands from a microcontroller or PC.  Finally, we create the interrupt routine, “Serial_Interrupt:”

That wraps up the overview of the firmware so, let’s move along to the optional Windows control application.

Here is a screen capture of the application: 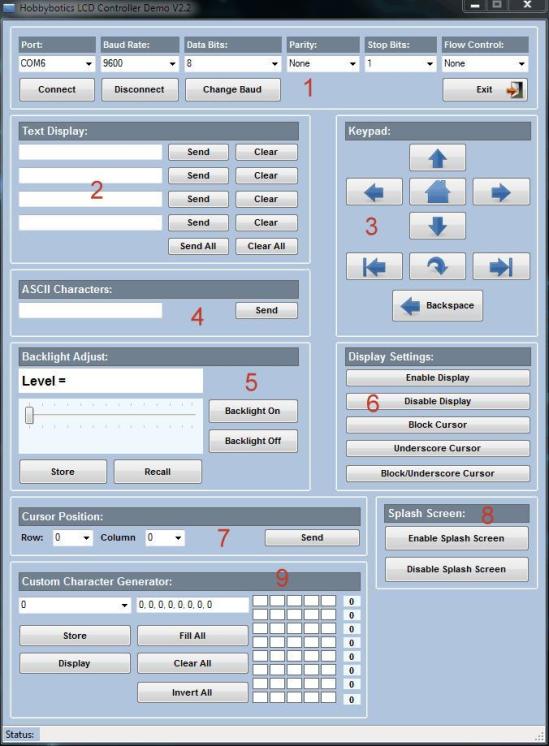 There is a lot of built in functionality that I have not covered and even though the application is robust, it is still in development.  I will post future updates to my github page.

This project covered my design for a serial LCD controller based on a PIC16F628A from Microchip.  We began by discussing the features and connections that allow the controller to be interfaced to both a microcontroller and PC serial port.  Next, an explanation of the command-set was presented along with typical examples.  Finally, we built the project, reviewed key points of the firmware, and presented the optional windows application.  Armed with the information presented in this project, one should be able to implement a cost effective serial LCD controller and save some precious I/O pins.

This example shows hardware and software used to implement the design.  It is recommended the viewer use sound judgment in determining and/or implementing this example for any particular application.  This example may include information from 3rd parties and/or information which may require further licensing or otherwise.  Additional hardware or software may be required.  Hobbybotics or any affiliates does not support or warrant this information for any purpose other than a design example and takes no responsibility for any mishaps (none being implied).