In the first installment of my adventures with 3D printers I talked briefly about Cubify Invent from the makers of the Cube 3D printer.

For just $49 you can pick up Cubify Invent which has many features that are contained in more expensive 3D packages such as Solid Works.  The work flow is similar to 123D by AutoDesk (free software).  You start your design by drawing a sketch in a 2D plane and selecting extrude or many of the other tools to convert the drawing into a 3D representation.  There is a 15 day trial so you can test it out.

Cubify offers some basic video tutorials to get you started.  You can also checkout Cubify Fans blog for more in depth tutorials (my favorite).

As a personal rule-of-thumb, I typically give myself roughly 30 minutes to figure out the basics of new software without having to reference a manual.  I believe that basic user experience should become routine within the first 30 minutes of use with more time reserved for tutorials and manuals once I have buy-in.  I found Cubify Invent easy to understand and within a couple of hours I had enough knowledge to create my first design.

I decided to clean up the mounting scheme for the electronics during the initial phases of the Ecksbot build. I’m looking for portability so, I decided to mount the power supply onto the printer. I also wanted to add more protection against accidental contact with the AC wiring than what is afforded by the barrier strip cover. As such, I present a front cover, rear cover and mounting plate for the WW-1230A 12VDC 30A switching power supply.  The design was created with Cubify Invent and available here on Thingiverse. 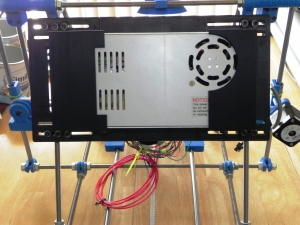 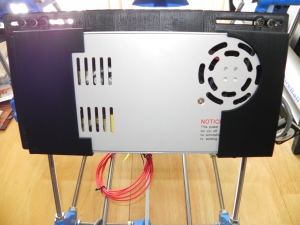 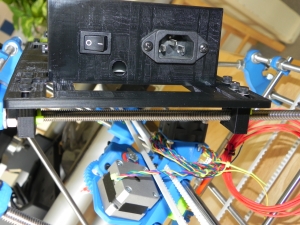 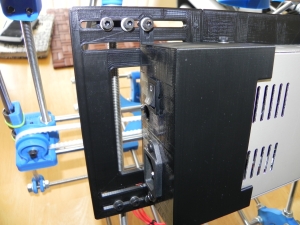 Follow the below instructions if you want to duplicate this project:

I printed the design files on the MakerBot Replicator with the following settings:

Print one of each:

The mounting plate is made from three pieces:

Snap the three pieces together and use super glue or acetone/ABS glue to bond.

This wraps up the discussion of my first experience with using Cubify Invent.  Next time I’ll continue the Ecksbot build with a discussion of how I intend to mount the electronics along with what hot-end I chose and how I mounted it.

Back in June 2012 I posted about purchasing a Makerbot Replicator 3D printer with dual extruders. Since then, I have been working with it so much that I have neglected many of my other project(s). As such, I intend to document my journey into the world of 3D fabrication.

According to the RepRap wiki:

RepRap takes the form of a free desktop 3D printer capable of printing plastic objects. Since many parts of RepRap are made from plastic and RepRap prints those parts, RepRap self-replicates by making a kit of itself – a kit that anyone can assemble given time and materials. It also means that – if you’ve got a RepRap – you can print lots of useful stuff, and you can print another RepRap for a friend…

RepRap is about making self-replicating machines, and making them freely available for the benefit of everyone…”

The RepRap movement has spawned improvements and innovations that led to derivatives such as The Printrbot, FoldaRap, Rostock and Replicator.  These printers use a method known as extrusion or addictive layering in which material is placed onto a build platform a layer at a time.

One of the first actions I took after many laborious nights of tweaking, adjusting, test printing and more tweaking is heading over to Thingiverse and downloading some open source creations.

One of the first objects I built is a derivative (with some modifications) of the Original Eggbot by Evil Mad Scientist.

Here is the Original Eggbot:

Here is the printable version that is available on Thingiverse:

Here is my version of the printable Eggbot: 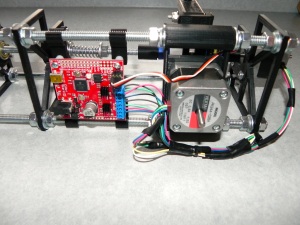 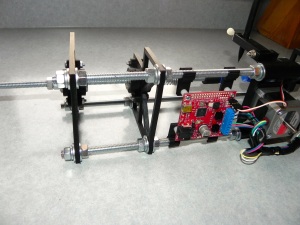 I added a modified endplate from here so that my pin attachment will have full range.

Naturally, after printing many designs from Thingiverse, I wanted to embrace the RepRap movement and print a 3D printer.  I scoured the RepRap wiki for ideas and settled on the Ecksbot printer which is a derivative of the Prusa Mendel.  Building your own 3D printer is not for the faint of heart but, the savings and knowledge gained is worth the journey.  The first issue I ran into is the Ecksbots files are designed to be printed on a larger build platform than what is available on the Replicator.  This posed a problem when I wanted to print the Y-Carriage.  A request made to the Ecksbot creators yielded a resized Y-Carriage that fit on the Replicator’s build platform.  If you plan to build your own and intend to use the Replicator to fabricate the parts, be sure to download the file labeled “Y_Cart_ReplicatorResize_x1.STL.”

Here are some pictures of my mostly completed Ecksbot:

There are two software options supported by Makerbot for use on the Replicator and the recently released Replicator2.  The first being ReplicatorG and the second being MakerWare.

MakerWare is currently in beta but offers some welcomed capabilities that are missing from ReplicatorG.  My favorite is the ability to import multiple parts onto the build plate.  This allows one to easily combine prints into a single session.  Another favorite is the ability to run multiple slicing sessions at the same time.  Again, the software is in beta and lacks the capability to decipher between the difference in the build area size of the Replicator2 and the Replicator.  The way I get around this is to add parts to the build surface in MakerWare, save the session as an STL file and open in ReplicatorG.  Now I can adjust as necessary and print from ReplicatorG or MakerWare.

A natural progression after getting comfortable with a 3D printer is to design some objects.  There are a number of free offerings that can export to the STL format.  The STL file will be converted into g-c0de by the slicer application.  A couple of popular free applications is Sketchup and OpenSCAD.  Sketchup loosely follows the path of traditional 2D/3D CAD applications while OpenSCAD takes a programming language approach.

An online offering is Tinkercad: 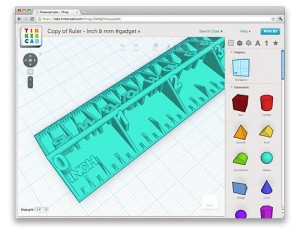 For just $49 you can pick up Cubify Invent from the makers of the Cube 3D printer.  Cubify Invent has many features that are contained in more expensive 3D packages such as Solid Works.  The work flow is similar to 123D by AutoDesk (free software).  You start your design by drawing a sketch in a 2D plane and selecting extrude or many of the other tools to convert the drawing into a 3D representation.  There is a 15 day trial so you can test it out.

Cubify offers some basic video tutorials to get you started.  You can also checkout Cubify Fans blog for more in depth tutorials (my favorite).

This wraps up my introduction/experience in 3D printing.  I’ll continue this series with some projects that I am working on as I learn to use Cubify.  My initial designs are currently centered on modifying the Ecksbot 3D printer I presented above.  I’ll also dive deeper into the printable Eggbot I briefly discussed above.  Till next post, enjoy!

I wanted to get into 3D printing so that I can start working on some physical interfaces for my design circuits. Traditional 3D printers are way out my price range but, along comes the RepRap movement and with it an army of 3D off-shoot printers.  Now, 3D printing is within reach of the hobbyist.  I decided to purchase a MakerBot Replicator because the company is pretty well known for quality products and the Replicator has a dual extruder.

MakerBot fully builds and tests each Replicator before shipping and packages each machine very well. 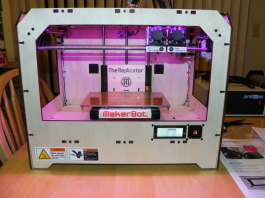 I followed the instructions from the MakerBot setup videos and manual without any issues. 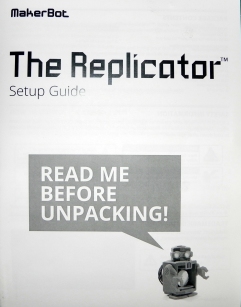 The Replicator has an SD slot built in so that you can save designs to a card and run them straight from the machine.  I selected one of the sample designs already loaded onto the SD card for my first print. 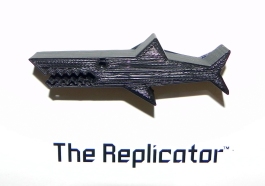 Another option is to load designs into the ReplicatorG software, connect a USB cable and print from the PC or MAC.

Here is a screenshot of my next print loaded into ReplicatorG along with the results: 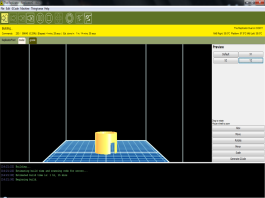 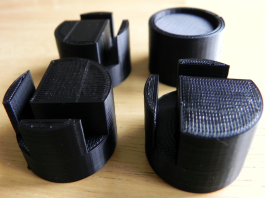 These are replacement feet for the Replicator as the stock set is cut rubber tubing which does not stay on very well. The design can be found here on Thingiverse.

I need to go through some more tutorials before I feel comfortable enough to create and print my own designs (there is a slight learning curve to the Replicator).

Onward I march so that I can finish up my Probotix FireBall V90 CNC build.